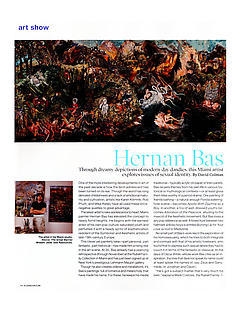 One of the more interesting developments in art of the past decade is how the term adolescent has been turned on its ear. Though the word has long denoted childishness and a lack of emotional maturity and cultivation, artists like Karen Kllimnik, Rob Pruitt, and Mike Kelley have all used these once negative qualities to great advantage.

The latest artist to take adolescence to heart, Miami painter Hernan Bas has elevated the concept to newly florid heights. He begins with the earnest ardor of his own pop-culture-saturated youth and perfumes it with a heady spritz of sophistication redolent of the Symbolist and Aesthetic artists of late-19th-century Europe.

This clever yet painterly take-part personal, part fantastic, part historical-has made him a rising star in the art scene. At 30, Bas already has a yearlong retrospective (through November) at the Rubell Family Collection in Miami and has just been signed up at New York's prestigious Lehmann Maupin Gallery.

Though he also creates videos and installations, it's Bas's paintings, full of romance and melancholy, that have made his name. For these, he keeps his media traditional -typically acrylic on paper or linen panels. Bas recasts themes from his own life in various historical or mythological contexts - or at least gives them titles worthy of a period drama. One painting of friends bathing - a natural-enough Florida watering hole scene - becomes Apollo With Daphne as a Boy. In another, a trio of well-dressed youths becomes Adoration of the Peacock, alluding to the mascot of the Aesthetic movement. But Bas loves a wry pop reference as well: A forest tryst between two hallmark willowy boys is entitled Burning Up for Your Love (a nod to Madonna).

No small part of Bas's work lies in the exploration of his homosexuality, which he tries to both integrate and contrast with that of his artistic forebears, who found that to express such sexual desire they had to couch it in terms of the fantastic or classical. (In the days of Oscar Wilde, whose work Bas cites as an inspiration, the love that dare not speak its name could at least speak the names of, say, Zeus and Ganymede, or Jonathan and David.)

"He's got a subject matter that's very much his own," explains Mark Coetzee, the Rubell Family Collection's director. "Some people come away with a very simplistic idea of his work; they think, 'How sweet, it's about these young boys in love.' But there's a much more complex conversation in his work about the past and present."

Indeed, what elevates Bas's work above the formulaic is this desire to incorporate other artistic traditions - the mystical obsessions of the Symbolists, the tropical glory and vivid colors of Fauvism, the quotidian beauty of David Hockney. "I confuse myself sometimes," he says, laughing. "I try to do something Goth and end up channeling Gauguin."

A Florida native whose parents emigrated from Cuba, Bas spent his dreamy early childhood with his family in the swampy woods of central Florida, a fertile landscape that has figured prominently in many of his paintings. It was there, on a steady diet of books about supernatural phenomena such as the Bermuda Triangle and UFOs, that Bas's imagination was first fired up for everything from ghosts to centaurs.

Not surprisingly, he found himself drawn to otherworldly artists Iike Odilon Redon and Gustave Moreau. "They Illustrated the mind-set of their era in a really Goth way," he says. Bas applies this approach in works like Telekinesis, which shows a youth practicing mind over matter to move a vase across a room, or his Redon-esque series of paintings of the Hardy Boys searching for clues in the darkness. He transforms the teenage sleuths into lovers probing intangible mysteries.

His highly evolved language of gay desire, pop culture, 19th-century dandyism, and dark dreamscapes seems all the more remarkable when you consider that until he dropped out of New York City's Cooper Union in 1996, Bas had been planning on a career in photography. Though he had always drawn and painted growing up, he only returned to them because, he recalls, they were just simpler to do. "It's the cheapest medium you can produce, and you can do it anywhere," the artist says of drawing. "It's a lot more mobile than photography is. In fact, I carried my entire first solo show to the gallery in a tube under my arm."

If that's not the kind of humble statement one associates with the always-grand Symbolists, it is at least the kind of plucky, can-do sensibility the Hardy Boys could relate to.