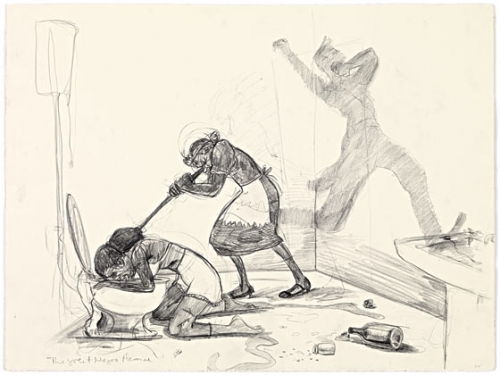 We last saw Kara Walker’s art on large-scale view in her 2007 Whitney retrospective. It was a visual conglomeration of poisonous American history, psychic pain, forbidden sex, and sheer artistry, much of its story told through enormous black-paper silhouettes. Many depicted the nightmare of the antebellum South, through scenes of slavery, castration, gang rapes in rotten bogs, bodies on fire. It was brilliant and bloodthirsty, displaying levels of physical and psychological cruelty not seen since Goya’s The Disasters of War.

Her current two-gallery show is a shot across America’s bow, and it advances her work even further. At Lehmann Maupin’s Lower East Side gallery, Walker is showing videos, notably the seventeen-minute puppet and shadow play Fall Frum Grace, Miss Pipi’s Blue Tale, centering on a terrifying indictment of false witness and sexual-racial hatred. Another stars Walker herself sitting, pantless, picking a guitar and trying to sing the blues as we see what may be glimpses between her legs. It’ll knock your brains out.

In Chelsea, at Sikkema Jenkins, the work on view is, if anything, even more powerful. Titled Dust Jackets for the Niggerati—and Supporting Dissertations, Drawings submitted ruefully by Dr. Kara E. Walker, it finds this singular visionary returning to two of her strongest suits—drawing and text—and the results are starkly startling. There are more than 40 drawings, many huge, some just text made from cutout letters stamped onto their surfaces. The show is installed floor-to-ceiling, surrounding you, gradually becoming a walk-in, wraparound Guernica—a fragmented holocaust of haunted figures emerging from dark backgrounds. America’s original sin is played out over and over again.

Walker has stepped away from her usual images of plantation life. This time, she’s edging closer to the present, starting with the horrors of Reconstruction and taking us forward, through southern belles’ accusations of rape and the Great Migration north, into the Jazz Age. There are guest appearances by Nina Simone and by Louise Beavers, the quintessential Hollywood “mammy” stereotype. Never content to leave well enough alone, Walker in her final drawings steps out of time entirely, depicting a freaked-out, doomed, apocalyptic carnival of the future, one where a sideshow stars severed black heads on pikes—all of them recognizable archetypes like “the savage,” “the minstrel,” “the pimp,” and “the hipster.” No one gets out of Walker’s world alive.

Not even Walker, whom I see twice in a self-destroying, ambivalent self-portrait, an image of suicide, redemption, and disgust. First she’s a vomiting addict, one whose head is being plunged into the toilet with a broom by Kara No. 2, a domestic servant (the broom could even be a paintbrush). A looming sexual shadow of a white man hovers on the wall, unperturbed by the mayhem he’s probably triggered. White mischief boils over into black mortification.

Don’t look for one take-home museum masterpiece here. Walker is brewing a stew. Longtime admirers will see that her drawing has taken leaps forward, gotten clearer, bolder, more immediate, suave, and intense. The way she takes over the gallery and your psychic space shows tremendous confidence. Plumbing her toolbox has suited her.

Walker’s sooty new world echoes one of the most powerful works in American art: Jacob Lawrence’s 1941 tour de force, the 60-panel The Migration of the Negro. Lawrence adapted the language of Cubism to tell his tale in angular quasi-­geometric figurative shapes and solid fields of secondary color. Walker goes further back in time, depicting this search for America as almost hysterical. We see whites watching blacks fight, black people hiding from the Klan, the letter N being fellated, black men anal-raping white women. As if to set up all this horror, the first work, just inside the gallery door, is of a black girl, newly arrived in the murky city, already stupefied by the surrounding danger.

In his classic Blues People, Amiri Baraka noted, “The Negro as slave is one thing. The Negro as American is quite another.” Walker’s amazing show ushers us into the abject, awful world Baraka’s Negroes-as-Americans have inhabited. More than that, though, this new work is also an object lesson for artists. Walker’s discipline and willingness to return to something as fundamental, intimate, and seemingly mundane as drawing—a medium that’s all about the marvels of movement, often passed over in the rush to new media—are remarkable. The astonishing ­reminder is that something so primitive and simple can take us to the wilder shores of consciousness, pain, and the imagination.