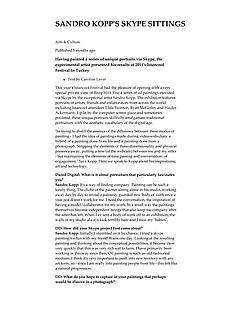 This year’s Istancool Festival had the pleasure of opening with a very special private view of Being With You; a series of oil paintings executed via Skype by the exceptional artist Sandro Kopp. The exhibition features portraits of artists, friends and collaborators from across the world including Istancool attendees Tilda Swinton, Ryan McGinley and Haider Ackermann. Up-lit by the computer screen glaze and sometimes pixilated, these unique portraits skillfully amalgamate traditional portraiture with the aesthetic vocabulary of the digital age.

"In trying to distill the essence of the difference between these modes of painting - I had the idea of paintings made during video-web-chats: a hybrid of a painting done from life and a painting done from a photograph. Stripping the elements of three-dimensionality and physical presence away, putting a lens (of the webcam) between me and my sitter - but maintaining the elements of time passing and conversation: of engagement." Says Kopp. Here we speak to Kopp about his inspirations, art and technology.

Dazed Digital: What is it about portraiture that particularly fascinates you??

Sandro Kopp: It's a way of finding company. Painting can be such a lonely thing. The cliché of the painter sitting alone in his studio, working away day by day to reveal a jealously guarded new body of work once a year just doesn't work for me. I need the conversation, the inspiration of having a model/collaborator for my work. In a small way the paintings themselves become independent beings that also keep me company after the sitter has left. When I've sent a body of work off to an exhibition, the walls of my studio always look terribly bare and I miss my "babies".

DD: How did your Skype project first come about??

Sandro Kopp: Initially I stumbled on it by chance. I tried a skype painting for fun with my friend Waris one day. Looking at the resulting painting and thinking about the conceptual possibilities, it became clear very quickly that this was very rich soil to farm. I have primarily been working in this way since then. Oil painting is such an old-fashioned medium. I think it's very important to push into new territory with any art form, so - since I am really into painting people from life - this felt like a natural progression.

DD: What do you hope to capture in your paintings that perhaps would be elusive in a photograph? ?

DD: What do you think is singular about the exchange between an artist and a sitter and how is that exchange filtered or mediated over skype??

Sandro Kopp: I don't know whether I am able to put the singularity of that experience into words, but I can definitely confirm that it is singular. Skype impacts on it in different ways. The challenge is to acknowledge how far away the other person is and at the same time to willfully deny that distance and paint as if we were in the room together. Visual and sonic interference of the video chat gives the exchange a certain precariousness that often means I and the sitter strain toward each other more than we would do if we were making a painting from life.

DD: Skype creates a frame or window that excludes almost everything else. I wonder, therefore, whether it might in fact be more intimate than a traditional sitting or whether it serves to objectify the sitter??

Sandro Kopp: The experience of video chats goes in two directions: On the one hand, one feels invisible, because our id struggles with equating the computer with the actual presence of another person in the room - after all it is just a box of noise and light - and at the same time one feels more visible, because there is always the potential of a third party looking in. Who knows who is capable of hacking skype chat lines? I have a friend who puts duct-tape over his webcam when he is not using it, because he is not sure whether it is really turned off all the time. So in that way, I think it is both more and less intimate than a sitting from life.

DD: I also wonder what happens to the sense of place- whether that is something that you are still interested in showing or whether the portraits exist in a kind of meta-state/hybrid space of the online world.?

Sandro Kopp: I think allowing us to experience the place that the other is in is one of the things that figurative painting and video-telephony tools like Skype have in common. Yesterday I was painting a friend who was sitting in her garden in LA and I really felt like I was there with her. At the same time, I think that to me it really is more about the person than about the place and sometimes, when I notice the background taking too much attention, I simplify it to allow the model to really occupy center-stage.

DD: How do you choose your sitters??

Sandro Kopp: Completely intuitively... Usually they are friends anyway. The sitting is a way of spending a solid chunk of time with someone, so whoever it is, it has to be someone I feel happy about spending a solid chunk of time with. I have a list with at least thirty names of people I want to paint on my desk that I keep adding to and crossing off the ones I have painted. In a way the conversation is the main event and the paintings are more of a by-product.

DD: What is the relationship between technology and art for you??

Sandro Kopp: The two have always been linked. I remember Björk saying something really profound in an interview once that stuck with me for a long time and expresses my feelings about this better than I can. The interviewer was talking about how purely computer-generated music was soul-less and Björk said something like: "If there's no soul in the computer it's only because nobody has bothered to put any soul into it."