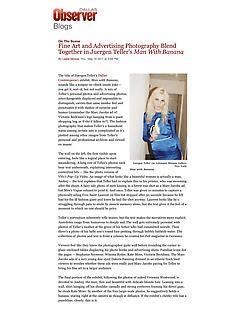 The title of Juergen Teller's Dallas Contemporary exhibit, Man with Banana, sounds like a tongue-in-cheek inside joke -- you get it, sort of, but not really. A mix of Teller's personal photos and advertising photos, interchangeably displayed and impossible to distinguish, carries that same insider feel and punctuates it with dashes of surprise and humor (remember the Marc Jacobs ad of Victoria Beckham's legs hanging from a giant shopping bag as if she'd fallen in?). The fashion photography that makes Teller's a household name among certain sets is complicated as it's plotted among other images from Teller's personal and professional archives and viewed en masse.

The wall on the left, the first visible upon entering, feels like a logical place to start meandering. A long row of Teller's photos each bear text underneath, explaining interesting contextual bits -- like the photo version of VH1'sPop-Up Video. An image of what looks like a beautiful woman is actually a man, Andrej -- the text explains that Teller had to explain this to his printer, who was swooning after the shoot. A fairy tale photo of men kissing in a forest was shot as a Marc Jacobs ad, but Men's Vogue refused to print it. And once, Teller was given 10 minutes to capture a physically ailing Yves Saint Laurent on film but stopped after 30 seconds because he felt bad for the ill fashion giant and knew he had the shot anyway. Laurent looks like he's struggling through pain to smile by muscle memory alone, but the text gives it the feel of a moment to which no one should be privy.

Teller's portraiture inherently tells stories, but the text makes the narratives more explicit. Anecdotes range from humorous to deeply sad. The wall gets extremely personal with photos of Teller's mother at the grave of his father who had committed suicide. Then there's a photo of his baby son's round face peeking through bubbly bathtub water. The collection of photos and text is from a column he created for Zeit magazine in Germany.

Viewers feel like they know the photographer quite well before rounding the corner to glass-enclosed tables displaying his photo books and advertising shots. Familiar icons dot the pages -- Stephanie Seymour, Winona Ryder, Kate Moss, Victoria Beckham. The Marc Jacobs ads of a very young doe-eyed Dakota Fanning dressed in an etheral frock lead viewers to wonder whether these ads were really just Marc Jacobs paying for Teller to bring his fine art to a larger audience.

The final portion of the exhibit, following the photos of naked Vivienne Westwood, is devoted to Andrej, the man, thin and beautiful with delicate blonde hair. Leaning into a wall, shirt hanging off his shoulder casually and strong eyebrows framing his direct gaze, he rivals Kate Moss. In another of the four large-scale photos, he suggestively holds a banana, staring right at the camera as though in defiance. If the exhibit's cheeky title has a punchline, clearly, this is it.