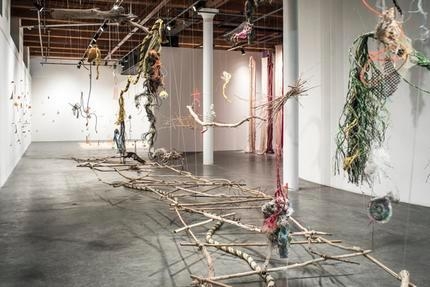 For the Chilean-born visual artist, poet, and filmmaker Cecilia Vicuña, the textual and the visual exist and function together in a familial relation, as if the making of objects and the shaping of words into images are knotted together like threads, binding and weaving themselves to form reified constellations that speak of the individual and collective simultaneously.[1] Vicuña’s work has a rich engagement with the materiality of art and life. A charged awareness of historically avant-garde strategies of dematerialization runs wide and deep within Vicuña’s practice, and is emphasized expansively in the artist’s recent exhibition at Contemporary Arts Center New Orleans (CACNO), Cecilia Vicuña: About to Happen. Co-organized by Andrea Andersson, Chief Curator of the Visual Arts at the CACNO, and Professor Julia Bryan-Wilson of the University of California, Berkeley, this unique presentation of Vicuña’s multidisciplinary work opens up a wide space of reflection on the role and power of ancestral memory and aesthetic creation to engage with the urgent economic and environmental crises of our contemporary moment.

Upon entering the tall, irregular gallery spaces of CACNO, the viewer is invited to read and view simultaneously—a curatorial decision enacted most powerfully in the first juxtaposition of visual and textual representation. The viewer is greeted with the compact elegance of Vicuña’s words: “The first precarious works were not documented, they existed only for the memories of a few citizens. History, a fabric of inclusion and exclusion, did not embrace them… In the void between the two, the precarious and its non-documentation established their non-place as another reality.”[2] The text finds a visual accompaniment in the vertical installation of richly dyed streams of woolen fabric, Quipu Visceral (2017). Made of colored cotton or camelid fibers, quipus (or “talking knots”) played a crucial role in ancient Andean South American cultures as record-keeping or data-collecting devices to gather census figures, monitor tax obligations and trade payments, and mark agricultural changes in seasons; thus, they stand as a form of writing before these regions and cultures were subsumed by Spanish colonial occupation and European systems of time and representation. Vicuña’s quipu transform this ancient practice into a visual metaphor for the collisions of two competing cultures and worldviews: the Andean universe of oral communication spatialized through an embodied, nonlinear encounter with time, and the Western mapping of time through the linear, teleological unfolding of the printed word. Investing herself as the reader–writer of the quipu—the quipucamayoc, or “one that animates or gives life to the knot”—and as a full participant within the Western poetic and visual tradition, Vicuña pleads with us to reimagine and recover our lost relationship to the spatial–temporal as a way to recast our awareness of and impact upon the ecological. Weaving and threading between and within ancient and Western systems, Vicuña preserves indigenous traditions, transforming these lost ways of being in the world into urgent political tools.

Vicuña utilizes found objects culled from walks along the deltas, beaches, waterways, and streets of the Louisiana coast in her large-scale installations that stretch across the floor of the gallery, such as Balsa Snake Raft to Escape the Flood (2017), and small-scale visual configurations, such as Precarios (2017), made up of 117 found-object sculptures that spread discursively across the walls of the gallery and operate as thoughtful meditations on the uncanny beauty of this natural and artificial sea-detritus. Strung with string, hung with wire, floating, framed, and placed with careful intention, these forms and objects are suspended in the air, on the wall, or on the floor, suggesting the diverse constellation of animal inhabitants of sea and land, and the natural environments (above or below the water) where these creatures live. Whether these inanimate life-forms are thriving or dying, memorialized or discarded, within these habitats is left ambiguously unclear. It is up to the viewer to unpack and peel apart the terrible sorrows and resplendent love for the sea and its citizens that Vicuña addresses in her works. Mobilizing us to mourn and honor the natural environment simultaneously, the artist is able to awaken an embodied form of care and concern for the beautiful that is consistently disavowed in our current culture.

The final room contains La Noche de la Especies (2009)—an immersive, cosmologically inflected film where Vicuña’s words and lines of poetic text shift and move into and out of patterns that recall constellations of stars, planets, comets, and other heavenly bodies. A meditation on the flexible richness of writing, the fluid resonances of collage practices, the mobile symbolic relations between art and poetry, and the open channel between representation and the natural world that Vicuna’s practice seeks to keep alive and breathing, the film does not signal a climax or closure to the exhibition, but an aperture into space and time, and an encounter with our own place within them.