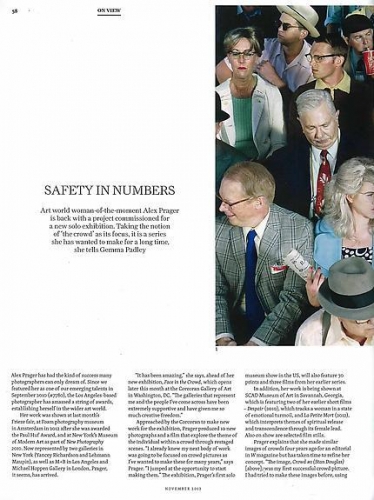 Safety in Numbers
By Gemma Paddley


Alex Prager has had the kind of success many photographers can only dream of. Since we featured her as one of our emerging talents in September 2010 (#7780), the Los Angeles-based photographer has amassed a string of awards, establishing herself in the wider art world.


Her work was shown at last month's Frieze fair, at Foam photography museum in Amsterdam in 2012 after she was awarded the Paul Huf Award, and at New York's Museum of Modern Art as part of New Photography 2010. Now represented by two galleries in New York (Yancey Richardson and Lehmann Maupin), as well as M+~ in Los Angeles and Michael Hoppen Gallery in London, Prager, it seems, has arrived.


"It has been amazing," she says, ahead of her new exhibition, Face in the Crowd, which opens later this month at the Corcoran Gallery of Art in Washington, DC. '"The galleries that represent me and the people I've come across have been extremely supportive and have given me so much creative freedom."


Approached by the Corcoran to make new work for the exhibition, Prager produced 10 new photographs and a film that explore the theme of the individual within a crowd through restaged scenes. "I already knew my next body of work was going to be focused on crowd pictures as I've wanted to make these for many years," says Prager. "I jumped at the opportunity to start making them." The exhibition, Prager's first solo museum show in the US, will also feature 30 prints and three films from her earlier series.


In addition, her work is being shown at SCAD Museum of Art in Savannah, Georgia, which is featuring two of her earlier short films- Despair (2010), which tracks a woman in a state of emotional turmoil, and La Petite Mort ( 2012), which interprets themes of spiritual release and transcendence through its female lead. Also on show are selected film stills.


Prager explains that she made similar images of crowds four years ago for an editorial in W magazine but has taken time to refine her concept. "The image, Crowd #1 (Stan Douglas) [above],1was my first successful crowd picture. I had tri4d to make these images before, using a smaller-scale production setup - I would call my friends and throw a wig on whoever showed up, then photograph them - but it never worked out. I had to make several attempts at the crowd shoots before I could figure out how to make them work technically. Once I had figured out the production side, I was able to make the series."


Drawing on the observational work of photographers such as Martin Parr, William Eggleston and Enrique Metinides, and taking stylistic cues from vintage Hollywood, Prager's highly cinematic, colour-saturated images often play on the tensions between reality and fiction. She frequently restages narratives or personal experiences that blur the line between public spectacle and private emotion, and her work often involves huge casts, elaborate sets and vintage costumes. In one image from the new series [overleaf], Prager deploys actors to recreate a beach scene, while other images depict a variety of congested public spaces, such as an airport terminal. There is something suffocating and unsettling about the densely populated scenes, where individuals become lost in a vast sea of faces.


"The images are about being in a crowd and the different emotions you can have, but they're also a look at the way things have changed with [the advent of] social media and the internet how we have developed this disjointed way of being connected to people," she explains. "I think you can also feel disconnected in a large crowd; you stand next to these people, yet you don't talk to them and most likely don't get to know them."


Although she works with a trusted team of people, Prager is very much involved with every aspect of the work - from the casting to choosing the props, selecting the costumes and designing the set. "I have people who I've been working with for years, who know what I'll veer towards and away from, but I'm involved in every little detail," she says. "There are weeks of pre-production where I'll be at costume houses with costume stylists, and I'll send hair and makeup pictures of exactly what I want. In terms of the casting, I'll go through all the pictures and pick out my favourite characters. We'll pick out outfits for each person days before the shoot, and then on set I'll line everyone up and change little details. It's a very detailed process, directed by me - even with the choice of music for the film and the editing."


The decision to make the new movie, which stars American actress Elizabeth Banks, was made quite late in the day, says Prager. "Once I realised how big the production was going to be, I thought we might as well shoot a film. Elizabeth Banks happened to be in town, available, and happy to be involved. She was perfect to play the role of the blonde, American working girl." While Prager's other films involved months of pre-production, the turnaround was much faster this time. "We had something like two weeks of pre-production," she says. "I wanted to include dialogue, so two days before we started shooting, I sat with my writer friend working on dialogue for Elizabeth. It all happened very fast and was initially unplanned, so in that way it was a huge departure from what I've done in the past, although you can still see it's me."


Describing herself as impulsive and often working based on her instincts, Prager nevertheless finds her work has loose themes running through it, which she says aren't always intentional. "I always seem to have some kind of theme, but it's never mapped out," she says. "This [the crowd theme] is probably the most specific theme I've had for a series. I need to stay interested and challenged in what I'm doing, and always follow this feeling," she adds. "I want to feel like I'm putting something out that hasn't been seen in this particular way."


So where does her interest in restaging narratives come from? "I'm not sure," she says. "Maybe it came from growing up in LA, where I saw how large productions happened logistically, so I knew this was within my reach. Shooting single portraits was something I had to do in order to keep moving forward, but I feel like I was looking for something - and maybe I still feel that way. I've made these crowd pictures and the film, but I've only just started exploring this theme."


Working more closely with the art world over the past few years has given Prager confidence, she says, although she has always been single-minded. "If I'm interested in doing something, I'll do it and cross my fingers that people will like it. I got lucky in that what I think is really cool and interesting is also what a lot of other people like. It's also about working really hard, which I think is probably the biggest factor."


For now, Prager's thoughts are firmly fixed on the Corcoran exhibition and she is eager to know what people will make of it. "[The work] is not the usual blue-sky Los Angeles landscapes with pretty girls that I've used in the past to lure people in," she says. "Those techniques are no longer interesting to me. Instead, I'm using interesting characters and crowds."


While Prager has no plans to move into feature films, she hasn't ruled it out. "I'm open to whatever might happen. For me, it's not really about whether the film format is short or long - it's about telling a story in a visually engaging, exciting and playful way, whether it's a three-minute experience or five hours."