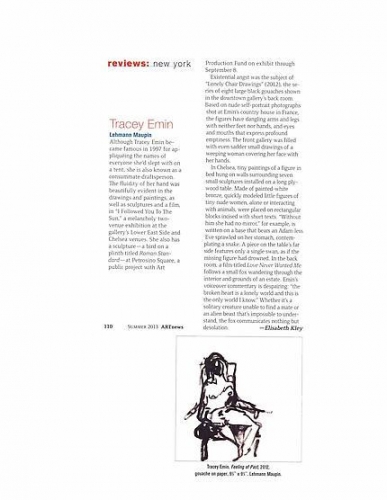 
Although Tracey Emin became famous in 1997 for appliquéing the names of everyone she'd slept with on a tent, she is also known as a consummate draftsperson.  The fluidity of her hand was beautifully evident in the drawings and paintings, as well as sculptures and a film, in "I Followed You To The Sun," a melancholy two-venue exhibition at the gallery's Lower East Side and Chelsea venues.  She also has a sculpture--a bird on a plinth titled Roman Standard--at Petrosino Square, a public project with Art Production Fund on exhibit through September 8.

Existential angst was the subject of "Lonely Chair Drawings" (2012), the series of eight large black gouaches shown in the downtown gallery's back room.  Based on nude self-portrait photographs shot at Emin's country house in France, the figures have dangling arms and legs with neither feet nor hands, and eyes and mouths that express profound emptiness.  The front gallery was filled with even sadder small drawings of a weeping woman covering her face with her hands.


In Chelsea, tiny paintings of a figure in bed hung on walls surrounding seven small sculptures installed on a long plywood table. Made of painted-white bronze, quickly modeled little figures of tiny nude women, alone or interacting with animals, were placed on rectangular blocks incised with short texts.  "Without him she had no mirror," for example, is written on a base that bears and Adam-less Eve sprawled on her stomach, contemplating a snake.  A Piece on the table's far side features only a single swan, as if the missing figure had drowned.  In the back room, a film titled Love Never Wanted Me follows a small fox wandering through the interior and and grounds of an estate.  Emin's voiceover commentary is despairing: "the broken hear is a lonely world and this is the only world I know."  Whether it's a solitary creature unable to find a mate or an alien beast that's impossible to understand, the fox communicates nothing but desolation.