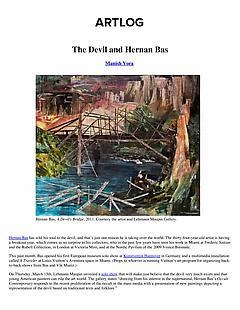 The Devil and Hernan Bas
By Manish Vora

Hernan Bas has sold his soul to the devil, and that’s just one reason he is taking over the world. The thirty-four-year-old artist is having a breakout year, which comes as no surprise to his collectors, who in the past few years have seen his work in Miami at Frederic Snitzer and the Rubell Collection, in London at Victoria Miro, and at the Nordic Pavilion of the 2009 Venice Biennale.

This past month, Bas opened his first European museum solo show at Kunstverein Hannover in Germany and a multimedia installation called A Traveler at Louis Vuitton’s Aventura space in Miami. (Props to whoever is running Vuitton’s art program for organizing back-to-back shows from Bas and Vik Muniz.)

On Thursday, March 15th, Lehmann Maupin unveiled a solo show that will make you believe that the devil very much exists and that young American painters can rule the art world. The gallery states “drawing from his interest in the supernatural, Hernan Bas’s Occult Contemporary responds to the recent proliferation of the occult in the mass media with a presentation of new paintings depicting a representation of the devil based on traditional texts and folklore.”