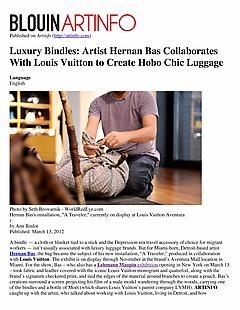 A bindle — a cloth or blanket tied to a stick and the Depression-era travel accessory of choice for migrant workers — isn’t usually associated with luxury luggage brands. But for Miami-born, Detroit-based artist Hernan Bas, the bag became the subject of his new installation, “A Traveler,” produced in collaboration with Louis Vuitton. The exhibit is on display through November at the brand’s Aventura Mall location in Miami. For the show, Bas – who also has a Lehmann Maupin exhibition opening in New York on March 15 – took fabric and leather covered with the iconic Louis Vuitton monogram and quatrefoil, along with the brand’s signature checkered print, and tied the edges of the material around branches to create a pouch. Bas’s creations surround a screen projecting his film of a male model wandering through the woods, carrying one of the bindles and a bottle of Moët (which shares Louis Vuitton’s parent company LVMH). ARTINFO caught up with the artist, who talked about working with Louis Vuitton, living in Detroit, and how Baudelaire influenced his upcoming Lehmann Maupin show.

Did Louis Vuitton give you free reign over the project?

Frankly, yes. The first proposal I sent out was accepted with enthusiasm and I was never actually approached with any restrictions.

What made you think of bindles?

When I began the project I initially studied the history of Vuitton as a brand and as a cultural entity, and one notion kept coming to the surface: the art of travel. Trying to think of how my own work could marry into that world led me to consider the question of how a character in one of my paintings would travel. Hence the bindle – I’ve painted these sort of “runaways” before and years ago even photographed myself lounging around in fields with my own bindle.

What message are you trying to convey through the bindles? Is it a form of social commentary?

The message is purposefully ambiguous, that said there are some obvious implications of luxury versus utilitarian objects, but these weren’t my concerns when conceiving the project. I simply wanted to place or elevate even the roughest form of travel to a luxury level. My character travels with a Louis Vuitton bindle and prefers a bottle of Moët to a flask. This is a character, an invented one and not meant to be much more than a simple gesture, a line in a poem.

What were Louis Vuitton’s thoughts on your concept?

The overall response seemed to be that the history of Louis Vuitton tied into the project in unexpected and exciting ways. The father of Vuitton himself walked on foot to Paris to start his career, although no one mentioned him carrying a bindle on the trip.

How did the experience compare to creating the work for your upcoming Lehmann Maupin show, “Occult Contemporary?”

Producing the project for Louis Vuitton was a much more collaborative effort than my day-to-day efforts in the studio. While I produced the works on my own (with the exception of the video), I was still aware that my working with these materials made it an instant collaboration with the identity and history of a brand with a legacy and artistic image of its own. It was a bit of a friendly “monkey on one’s shoulder” – of course a very stylish monkey.

“Occult Contemporary” is based on the Baudelaire quote, “The loveliest trick of the Devil is to persuade you that he does not exist.” How did you come across it and why did you decide to conceptualize a show around it?

I approached the images in this show as portraying the devil as a sympathetic character. Through my research on so called “devil’s pacts” I found over and over again that it was the devil, not mankind, that was tricked or fooled in the end. The devil would follow through on his end of the deal and it was always man that weaseled out of the contract, and I just thought, he’s just trying to do his job and we keep ripping him off! On a broader level, the title of the show refers to the Baudelaire quote more directly. “Occult Contemporary” is a play on the term Adult Contemporary, a genre equivalent to elevator music. For me it is a moment culturally in which the devil could easily hide in plain sight, the occult more than ever is a lighthearted affair, children go to witches schools, vampires in high school, psychic children and ghost hunting all over the television. While I love the proliferation of all things supernatural there is a longing for those things to have the power to frighten and posses they way they could a century ago.

You’re originally from Miami. Why did you move to Detroit?

Real estate would be the frontrunner, but I also find something very unique about this city – it is a bit wild. There is a certain energy around living potentially on the edge of collapse or recovery. It is also a great place if you crave some degree of isolation.

How is the environment in Detroit for an artist compared to other places?

Everyone keeps saying it’s “the new Berlin,” and I can imagine that is due to the spaces artists can afford as compared to most other major cities. There are things happening here, but honestly, I don’t partake in much of the scene, as it wasn’t my reason for coming here. The DIA though is an amazing museum and I’m really happy I have somewhere to go if the itch to see great works starts to bug me.