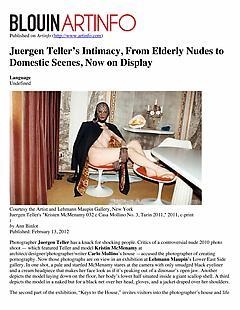 Photographer Juergen Teller has a knack for shocking people. Critics of a controversial nude 2010 photo shoot — which featured Teller and model Kristin McMenamy at architect/designer/photographer/writer Carlo Mollino’s house —accused the photographer of creating pornography. Now those photographs are on view in an exhibition at Lehmann Maupin’s Lower East Side gallery. In one shot, a pale and startled McMenamy stares at the camera with only smudged black eyeliner and a cream headpiece that makes her face look as if it’s peaking out of a dinosaur’s open jaw. Another depicts the model laying down on the floor, her body’s lower half situated inside a giant scallop shell. A third depicts the model in a naked but for a black net over her head, gloves, and a jacket draped over her shoulders.

The second part of the exhibition, “Keys to the House,” invites visitors into the photographer’s house and life in Suffolk, England. Teller mixes portraits of his family and friends with landscapes. One photo shows his wet dog next to a bouquet of pink roses at the kitchen sink, while another shows the sun shining through tree branches.

The last section, “Man and Woman,” juxtaposes a photograph of naked 70-year-old fashion designer Vivienne Westwood sprawled on a couch, à la Manet’s “Olympia,” with one of photographer William Eggleston, 72, and one of a boy (Teller’s son Ed) on the verge of puberty. The images highlight two opposite stages in a male’s life — “loss of virility,” according to the Lehmann Maupin release, and “coming of age” — and that of a strong female figure (Westwood).

“Juergen Teller” demonstrates the photographer’s talent for narrative through his trademark raw, overexposed style. Although most know Teller best through his quirky Marc Jacobs advertisements (which have included Victoria Beckham, Wynona Ryder, and Cindy Sherman over the past 14 years), this exhibition shows Teller’s true range.