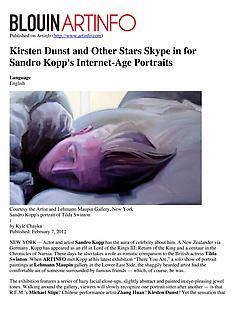 NEW YORK— Actor and artist Sandro Kopp has the aura of celebrity about him. A New Zealander via Germany, Kopp has appeared as an elf in Lord of the Rings III: Return of the King and a centaur in the Chronicles of Narnia. These days he also takes a role as romatic companion to the British actress Tilda Swinton. When ARTINFO met Kopp at his latest exhibition “There You Are,” a solo show of portrait paintings at Lehmann Maupin gallery in the Lower East Side, the shaggily bearded artist had the comfortable air of someone surrounded by famous friends — which, of course, he was.

The exhibition features a series of hazy facial close-ups, slightly abstract and painted in eye-pleasing jewel tones. Walking around the gallery, viewers will slowly recognize one portrait sitter after another — is that R.E.M.’s Michael Stipe? Chinese performance artist Zhang Huan? Kirsten Dunst? Yet the sensation that every image is flattened and discolored in the same oddly familiar way slowly creeps in. After enough time is spent with the work (or the press release is perused) realization dawns: these are portraits painted over Skype, the online video tool that has forever changed how we communicate with each other.

“I spend a fair bit of time on the road, and also I live in the middle of Scotland, so it’s difficult to find sitters up there sometimes,” Kopp explained. Painting via Skype, using a far-flung network of friends as subjects, only seemed natural. “It’s a chance for me to connect with people,” he said. Kopp’s first Skype painting was of Indian-American jewelry designer Waris Ahluwalia; several portraits of Ahluwalia are on display in a room on Lehmann Maupin’s second floor.

The portraits are painted from live Skype chats rather than photographs or screengrabs. The presence of a living, breathing model is important for the artist, even over the Internet: “I need the other to contribute themselves as much as possible,” Kopp said. A video recording of one sitting shows Kopp and Ahluwalia chatting, blasting music, and pulling practical jokes with the computer camera as the session goes on (each painting requires two to three hours of sitting). Photographer Ryan McGinley, another of Kopp’s subjects, told ARTINFO that sitting for Kopp “was like a therapy session.”

Kopp works to replicate as closely as possible the image he sees on the computer screen — hence the blocky abstraction, due to Skype’s pixelization. “There’s an immediacy to the picture, which makes it a lot easier, because you’re not distracted by too much detail,” he said. The colors of the portraits also reflect the digital context: several of the portrait subjects are illuminated only by the cold, blue light of a laptop display.

In his portraits, Kopp hopes to combine a “super old-fashioned medium” like oil painting with something “very, very contemporary.” Still, Skype is not exactly new — the video conferencing software was introduced in 2006 — and its use has spread far beyond global-trotting cultural circles. “Yesterday, I Skyped my mom just for the exhibition opening. It’s so much more immediate than a phone call or anything else,” Kopp said. “It’s really like science fiction is now.”