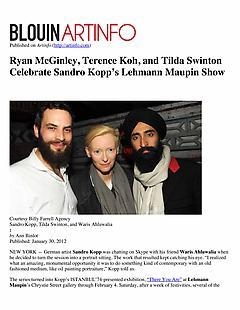 German artist Sandro Kopp was chatting on Skype with his friend Waris Ahluwalia when he decided to turn the session into a portrait sitting. The work that resulted kept catching his eye. “I realized what an amazing, monumental opportunity it was to do something kind of contemporary with an old fashioned medium, like oil painting portraiture,” Kopp told us.

Ryan McGinley said that he was using Skype for the first time when he sat for Kopp. “It was like a therapy session. Sandro just talked to me the whole time — I felt like I spilled my guts to him.”

“I thought someone should do Skype portraits a while ago,” Bill Powers, “Work of Art” judge and owner of Half Gallery, told us. “I thought it was an interesting way to use technology, especially in Terence’s piece, you can see a little bit of the blue glow from the screen.”

Kopp sat at a table in the corner with his partner Tilda Swinton, Koh, Ahluwalia, and other friends until the wee hours of the morning. How did Swinton manage to look so fresh in her Lanvin gown at the SAG Awards the next evening? We wish we knew her secret.