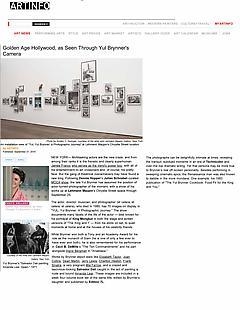 NEW YORK— Multitasking actors are the new craze, and from among their ranks it is the frenetic and clearly superhuman James Franco who serves as the trend's poster boy, with all of his entertainment-to-art crossovers and, of course, his pretty face. But the gang of theatrical overachievers may have found a new king. Following Dennis Hopper’s Julian Schnabel-curated MOCA show, the late Yul Brynner has assumed the position of actor-turned-photographer of the moment, with a show of his works up at Lehmann Maupin's Chrystie Street space through September 25.

The actor, director, musician, and photographer (et cetera, et cetera, et cetera), who died in 1985, has 70 images on display in "YUL, Yul Brynner: A Photographic Journey." The show documents many facets of the life of the actor — best known for his portrayal of King Mongkut in both the stage and screen versions of "The King and I" — from his stints on set, to quiet moments at home and at the houses of his celebrity friends.

While Brynner won both a Tony and an Academy Award for his role as the monarch of Siam (he is one of only a few ever to have ever won both), he is also remembered for his performance in Cecil B. DeMille’s "The Ten Commandments" and his part alongside Ingrid Bergman in "Anastasia."

Works by Brynner depict stars like Elizabeth Taylor, Joan Collins, Dean Martin, Jerry Lewis, Charlton Heston, Frank Sinatra, a very pregnant Mia Farrow, and a crazed and lascivious-looking Salvador Dalí caught in the act of painting a nude and bound Amanda Lear. These images are included in a sleek four-volume book set of the same title, edited by Brynner’s daughter and published by Edition 7L.

The photographs can be delightfully intimate at times, revealing the tranquil, subdued moments in an era of Technicolor and over-the-top dramatic acting. Yet that persona may be more true to Brynner’s real off-screen personality. Besides performing in sweeping cinematic epics, the Renaissance man was also known to dabble in the more mundane. One example: his 1983 publication of "The Yul Brynner Cookbook: Food Fit for the King and You."