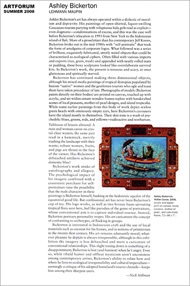 Ashley Bickerton's art has always operated within a dialectic of moralism
and depravity. His paintings of open-shirted, liquor-swilling
Caucasian tourists partying with voluptuous hula girls read as explicit, even
dogmatic-condemnations of excess, and this was the case well
before Bickerton's relocation in 1993 from New York to the Indonesian
island of Bali. More of a proselytizer than his contemporary Jeff Koons,
Bickerton broke out in the mid-1980s with "self-portraits" that took
the form of amalgams of corporate logos. What followed was a series
of brilliant, exquisitely fabricated, utterly weird objects that could be
characterized as ecological ciphers. Often filled with various imports
and exports (rice, grain, trash) and appended with neatly rolled mats
or padding, these boxy sculptures looked like overelaborate survival
kits. In Bickerton's work, the present is tenuous and scary, at once
gluttonous and spiritually starved.
Bickerton has continued making three-dimensional objects,
although his mixed-media paintings of tropical dystopias populated by
buxom "native" women and the gentlemen tourists who ogle and toast
them have taken precedence of late. Photographs of models (Bickerton
paints directly on their bodies) are printed on canvas, touched up with
acrylic, and set within ornate wooden frames replete with handcrafted
scenes of local peasants, mother-of-pearl designs, and island tropicalia.
While some earlier paintings from this body of work depict sexless
green heads with ominously empty eyes, here Bickerton's carousers
have the island mostly to themselves. Their skin tone is a wash of psychedelic
blues, greens, reds, and yellows-radioactive and nonhuman.
Tableaux of leisure abound: A man and woman canoe on crystal-
clear waters; the same pair read in a hammock, merrily
trashing the landscape with their waste; robust women, fruits,
and pigs are thrust in the face of the viewer. Has Bickerton's
debauched antihero achieved domestic bliss? Bickerton's work stinks of
autobiography and allegory. The psychological impact of
his imagery combined with a consistent penchant for selfportraiture
raise the possibility that the male character in these
paintings is Bickerton himself, basking in the hedonistic squalor of the
equatorial good life. But confessional art has never been Bickerton's
cup of tea. His logo works, as well as two bronze busts sprouting
tropical flora seen here, feel like parodies of the genre of portraiture,
whose conventional aim is to capture individual essence. Instead,
Bickerton portrays personality tropes. His art caricatures the concept
of conforming to archetypes, of flocking in groups.
Bickerton is interested in Indonesian craft and the use of local
materials such as coconut for his frames, and in notions of primitivism
in the twenty-first century. His art remains adamantly moral; whatever
pleasure he depicts is always irresponsible, although in this exhibition
the imagery is less debauched and more a caricature of
conventional relationships. This slight toning down is something of a
disappointment; Bickerton is best (and funniest) when he's angry. Even
so, while ribald humor and offbeat mysticism aren't uncommon
among contemporary artists, Bickerton's ability to relate how and
where he lives to ecological irresponsibility and cultural imperialism-seemingly
a critique of his adopted homeland's tourist clientele-keeps
him among their sharpest users.
-Nick Stillman