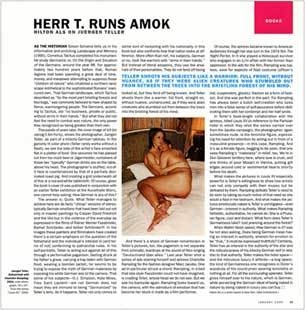 As the Historian Simon Schama tells us in his informative and enriching Landscape and Memory (1995), Cornelius Tacitus completes his monumental study Germania; or, On the Origin and Situation of the Germans, around the year 98. For approximately two hundred years before that, Roman legions had been spending a great deal of time, money, and manpower attempting to suppress those "children of nature" who inhabited a northern landscape antithetical to the sophisticated Romans' manicured own.

That German landscape, which Tacitus described as "for the most part bristling forests and foul bogs", was commonly believed to have shaped its fierce, warmongering people. The Germans, according to Tacitus, did "no business, private or public, without arms in their hands." But what they did not feel the need to combat was nature, the only power they recognized as being greater than their own.

Thousands of years later, the cover image of Ich bin vierzig (I Am Forty), shows the photographer, Juergen Teller, we see the side of the artist's face smashed flat in a platter of food. One assumes he has passed out from too much beer or Jägermeister; containers of those two "typically" German drinks are on the table, above his head. The photographer's stuffed, out-of-it face is countenanced by that of a partially decimated roast pig. And creating a grid underneath all of this is a red-and-white tablecloth. Of course, given the book's cover (it was published in conjunction with an earlier Teller exhibition at the Kunsthalle Wien), one cannot help asking: How German is any of this?

The Answer is: Quite. What Teller manages to achieve here are the de facto "cheap" versions of stereotypically German emotions that have been laid out not only in master paintings by Casper David Friedrich and the like but in the violence of the everyday as expressed in the films of Rainer Werner Fassbinder, Barbet Schröder, and Volker Schlöndorff. In the images these painters and filmmakers have created there's a certain emphasis on the question of the fatherland and the individual's interest in (and terror of not) conforming to patriarchal rules. In his self-portraits, Teller is acting out against all of this through a performative paganism. Getting drunk at his father's grave, carrying a tray laden with German food, wearing a bomber jacket, he seems to be trying to expose the myth of maleness by exposing his white German ass to the camera. That some of his subjects – O.J. Simpson, Kate Moss, Yves Saint Laurant – are not German does not mean they are immune to being "Germanized" by Teller's lens. As it happens, Teller not only comes to some sort of reckoning with his nationality in this book but also confronts how that nation looks at difference.

More often than not, his subjects, German or no, look like warriors with "arms in their hands." But instead of literal weapons, they use the arsenal of their personalities. They do not fend off being looked at, but they fend off being known. And Teller shoots them like a warrior: full front, straight on, without nuance, un manicured, as if they were alien creatures who stumbled out from between the trees into the bristling forest of his mind.

And there's a share of German romanticism in Teller's pictures, too. His paganism is not separate from schmaltz, teardrops at the sound of Nico singing "Deutschland über alles." Last year Teller shot a series of ads starring himself and actress Charlotte Rampling for the fashion designer Marc Jacobs.One ad in particular struck a chord: Rampling, in a bed that late-style Fassbinder could not have imagined, is cradling Teller, whose head we do not see. But we see his backside again. Rampling looks toward us, the camera, with the admixture of emotion that has become her stock in trade as a film performer.

Of course, the actress became known to American audiences through her star turn in the 1974 film The Night Porter. In it she played a Holocaust survivor who engages in an s/m affair with her former Nazi oppressor. In the ads for the film, Rampling was topless, save for aspects of Nazi costumes (officer's hat, suspenders, gloves): Nazism as a form of fashion. And she was perfect in the part. For Rampling has always been a butch self creation who lures men into false sense of self-assurance before obligating with her contempt and her half smile.

In Teller's book-length collaboration with the actress, titled Louis XV (in reference to the Parisian hotel in which they shot the series carried over from the Jacob's campaign), the photographer, again sometimes nude, is the feminine figure, expressing his need for attention by acting out in front of a masculine presence – in this case, Rampling. And it's as a female figure, begging to be seen, that one sees Rampling's "maleness" in relief, too. We're in Don Giovanni territory here, were love is cruel, and one things of poor Mozart in Vienna, putting gilt edges around cold or sentimental hearts shortly before his death.

What makes the picture in Louis XV especially powerful is Teller's willingness to show how artist's can not only compete with their muses but be defeated by them. Rampling defeats Teller’s need to be seen by taking as much notice of that need as she would a Nazi in her bedroom. And what makes the picture emotionally naked is Teller’s unmitigated – read German – interest in authority. What makes Rampling fantastic, authoritative, he cannot do: she is a Prussian figure, cool and distant. What form does Teller’s Germanness take? Just prancing around the forest?

When Walter Abish asked, how German is it? Was he not also asking, Does being German mean having an interest in authority, wherein for emotion to be “true”, it must be expressed truthfully? Certainly, Teller has an interest in the authority of the star and the ridiculousness of his kitschy German self in relation to that authority. Teller makes the hotel space – and the ridiculous luxury it affords – a bog space, the kind of Germanness one recognizes in Dürer’s woodcuts of his countrymen wearing loincloths or nothing at all. For all the surrounding splendor, Teller gives himself over to his nature, which is German, while perverting the German ideal of being naked in nature by being naked in luxury you can buy.

Hilton Als is a writer based in New York.