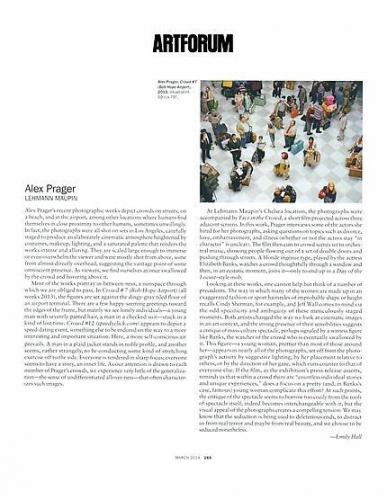 
Alex Prager's recent photographic works depict crowds on streets, on a beach, and at the airport, among other locations where humans find themselves in close proximity to other humans, sometimes unwillingly. In fact, the photographs were all shot on sets in Los Angeles, carefully staged to produce an elaborately cinematic atmosphere heightened by costumes, makeup, lighting, and a saturated palette that renders the works intense and alluring. They are scaled large enough to immerse or even overwhelm the viewer and were mostly shot from above, some from almost directly overhead, suggesting the vantage point of some omniscient presence. As viewers, we find ourselves at once swallowed by the crowd and hovering above it.


Most of the works portray in-between-ness, a nonspace through which we are obliged to pass. In Crowd# 7 (Bob Hope Airport) (all works 2013), the figures are set against the dingy-gray riled floor of an airport terminal. There are a few happy-seeming greetings toward the edges of the frame, but mainly we see lonely individuals-a young man with severely parted hair, a man in a checked suit-stuck in a kind of lost rime. Crowd #12 (speedyclick.com) appears to depict a speed-dating event, something else to be endured on the way to a more interesting and important situation. Here, a more self-conscious air prevails. A man in a plaid jacker stands in noble profile, and another seems, rather strangely, to be conducting some kind of stretching exercise off to the side. Everyone is rendered in sharp focus; everyone seems to have a story, an inner life. As our attention is drawn to each member of Prager's crowds, we experience very little of the generalization-the sense of undifferentiated allover-ness-that often characterizes such images.


At Lehmann Maupin's Chelsea location, the photographs were accompanied by Face in the Crowd, a short film projected across three adjacent screens. In this work, Prager interviews some of the actors she hired for her photograph , asking questions on topics such as divorce, love, embarrassment, and illness (whether or not the actors stay "in character" i unclear). The film then cuts to crowd scenes set to orchestral music, showing people flowing out of a set of double doors and pushing through streets. A blonde ingenue type, played by the actress Elizabeth Banks, watches a crowd thoughtfully through a window and then, in an ecstatic moment, joins it-only to end up in a Day of the Locust-style mob.


Looking at these works, one cannot help but think of a number of precedents. The way in which many of the women are made up in an exaggerated fashion or sport hairstyles of improbable shape or height recalls Cindy Sherman, for example, and Jeff Wall comes to mind via the odd specificity and ambiguity of these meticulously staged moments. Both artists changed the way we look at cinematic images in an art context, and the strong presence of their sensibilities suggests a critique of mass-culture spectacle, perhaps signaled by a witness figure like Banks, the watcher of the crowd who is eventually swallowed by it. This figure-a young woman, prettier than most of those around her-appears in nearly all of the photographs, set off from the photograph's activity by suggestive lighting, by her placement relative to others, or by the direction of her gaze, which runs counter to that of everyone else. If the film, as the exhibition's press release asserts, reminds us that within a crowd there are "countless individual stories and unique experiences," does a focus on a pretty (and, in Banks's case, famous) young woman complicate this effort? At such points, the critique of the spectacle seems to borrow too cozily from the tools of spectacle itself, indeed becomes interchangeable with it, bur the visual appeal of the photographs creates a compelling tension: We may know that the seduction is being used to deleterious ends, to distract us from real terror and maybe from real beauty, and we choose to be seduced nonetheless.