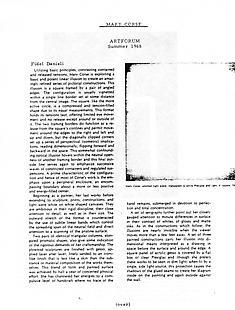 Utilizing basic principles, contrasting contained and released tensions, Mary Corse is exploiting a basic and potent linear illusion to create an amazingly refined series of pictorial constructions. This illusion is a square framed by a pair of angled edges. The configuration is usually vignetted within a single line border set at some distance from the central image. The square, like the more active circles, is a compressed and tension-filled shape due to its equal measurements. This format holds its tensions taut, offering limited eye movement and no release except around or outside of it. The two framing borders do function as a release from the square’s confines and permit movement around the edges to the right and left and up and down, but the diagonally clipped corners set up a series of perspectival (isometric) implications, reading dimensionally, flipping forward and backward in the space. This somewhat confounding optical illusion hovers within the neutral openness of another framing border and this final outside line serves again to emphasize successive waves of constricted containers and regulated suspensions. A prime characteristic of the configuration and hence of most of Corse’s work is the emphasis upon a peripheral enclosure, an encompassing boundary about a more or less positive and energy-filled center.

Beginning as a painter, her last works before extending to sculpture, prints, constructions, and light were white on white shaped canvasses. They are ambitious in their rigid discipline, their close attention to detail, as well as in their size. The outward stretch of the format is counteracted by the use of subtle linear bands, which control the spreading span of the neutral field and direct attention to a scanning of the pristine surface.

Two pairs of identical triangular columns, elongated prismatic shapes, also give some indication of the rigorous demands of her craftsmanship. The plywood sculptures are finished with gesso, applied layer after layer, finely sanded to an ivory like finish that is less like a skin than the substance or material composition of the works themselves. This blend of form and painted surface was achieved by half a year of concerted physical effort. She has channeled her energies to a compulsive level of handcraft where no trace of the hand remains, submerged in devotion to perfection and total concentration.

A set of serigraphs further point out her closely gauged attention to minute differences in surface in their contrast of whites, of glossy and matte inks. As in the constructions which follow, the illusions are nearly invisible when the viewer moves more than a few feet away. A set of three painted constructions carry her illusion into dimensional means interpreted as a drawing in space before the surface and around the edge. A square panel of acrylic gesso is covered by a flat box of clear Plexiglas and (though she prefers these works to be seen in dim light) when lit by a single, side light source, this projection causes the shadows of the glued seams to create her diagram inside on the painting and again outside against the wall.

The most recent work is a massive suspended light structure where fluorescent tubes, encased in opaque white Plexiglas, are covered again by a clear Plexiglas box. The panels are set into an immaculate white wood frame. The light at the center is totally aggressive in its intensity, glares forward and escapes out the sides to cause a halation on the surface of the frame. In one of the really intelligent uses of the narrow edge of clear Plexiglas, light is transmitted to the seams describing her favored configuration as an intense white line in front of the panel. The darker grayish area around the edge of the panel helps control the internal floating sensation yet is high enough in key to convey the sense of weightlessness against the surrounding background. The light is of such power that it survives in an already lighted environment and when close to it causes numerous dazzling effects on the overloaded retinal receptors, the most easily experience being a Poons-like sequence of dancing dark spots. Seen from a distance as with the work of Flavin and James Turrell, one is entirely engaged in the cleanly brilliant effects and emerges refreshed from the experience of contemplating it. This work by Corse is just as convincing for one is inundated by an overwhelming optical bath of radiance. The written statement she would prefer to have appear is: “Light, Plexigals (transparent and white), Electricity, Energy, Love.” A work in progress, which is quite similar, is lit by closely spaced rows of neon, and will protrude from the hung panel in front and back, again repeating her motif of a field of white, slipping forward and receding.