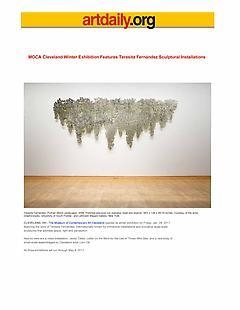 Also on view are a video installation, Javier Téllez, Letter on the Blind for the Use of Those Who See, and a new body of small-scale assemblages by Cleveland artist Lorri Ott.

All three exhibitions will run through May 8, 2011.

Teresita Fernández: Blind Landscape presents a spectrum of the artist’s most recent and ambitious projects created between 2005-2009, including three recent large-scale sculptures, a series of eight wall works and a monumental drawing made on site. Featured among the large-scale works is Vertigo (sotto en su) from 2007, comprised of layers of precision-cut, highly polished metal woven into a reflective and intricate arboreal pattern suspended high above the viewer. One of the wall pieces, Portrait (Blind Landscapes), from which the exhibition draws its name, is made of polished precision cut stainless steel and enamel. Fernandez’s work vacillates between object and optical phenomena, often doubling as screens, mirrors and lenses, while exploring the relationship between nature and perception.

The exhibition is curated by David Louis Norr, Chief Curator, and organized by USF Contemporary Art Museum, Institute for Research in Art, Tampa.

Javier Tellez, Letter on the Blind for the Use of Those Who See documents on video six blind individuals as they touch and respond to a live elephant. Based loosely on an Indian fable, the film balances footage of these interactions with verbal commentary by each person about his or her blindness. The raw environment – an empty swimming pool in Brooklyn’s McCarren Park – sharpens the men’s distinctive physical and emotional response to the elephant. The film serves as a thoughtful meditation on the deeply personal and affective nature of all perception.

On view in the William D. Ginn Gallery, this exhibition was organized by MOCA Cleveland and coordinated by Megan Lykins Reich, Director of Education and Associate Curator.

In the Lorri Ott passive voices exhibition, the artist combines glossy pigmented resin with mundane found objects, such as rags, asphalt and cardboard, to create subtle but potent contrasts in form, technique and medium. These luscious visual relationships give rise to hauntingly allusive artworks that embody the dramatic range of human emotion and experience.

This Pulse Series Exhibition, organized by MOCA Cleveland, is curated by Megan Lykins Reich, Director of Education and Associate Curator.