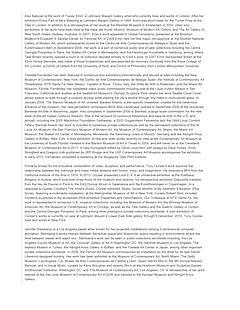 Five in Istanbul: A Selection of Artists from Lehmann Maupin Gallery Exhibit at Borusan Müzik Evi

The Miami-based artist Hernan Bas explores the codes of dandyism and its subculture as a means to define sexual attraction. His paintings are tinged with nihilist romanticism, born of literary intrigue and a passion for historical painting. Small, frail and sensuously delightful, Bas's paintings personify epic romance embracing both the decadence and nastiness of pleasure. He is included in numerous private and public collections worldwide including the Rubell Collection in Miami, the Museum of Modern Art in New York, the San Francisco Museum of Modern Art, The Museum of Contemporary Art in Miami, the Whitney Museum of American Art, among others. In 2007, the Rubell Family Collection launched an exhibition of Bas's work. Spanning a decade, this exhibition included examples from each of the artist's series then travelled to the Brooklyn Museum of Art in February 2008. A new work by Hernan Bas was also included in Elmgreen & Dragset's curation of the Nordic and Dutch Pavilions in the 53rd Venice Biennale.

Also featured is the work of Tracey Emin, a Lehmann Maupin Gallery artist who currently lives and works in London. After her exhibition Every Part of Me’s Bleeding at Lehmann Maupin Gallery in 1999, Emin was short-listed for the Turner Prize at the Tate in London. In addition to a retrospective of her work at the Stedelijk Museum in Amsterdam in 2002, other solo exhibitions of her work have been held at the Haus der Kunst, Munich; Museum of Modern Art, Oxford; and The Art Gallery of New South Wales, Sydney, Australia. In 2007, Emin’s work appeared in Global Feminisms, presented at the Brooklyn Museum’s Elizabeth A Sackler Center for Feminist Art. In 2008 Emin held her first major retrospective at the Scottish National Gallery of Modern Art, which subsequently toured to the Centro de Arte Contempoáneo de Málaga in Spain and the Kunstmuseum Bern in Switzerland 2009. Her work is a part of numerous public and private collections including the Centre Georges Pompidou in Paris, the Walker Art Center in Minneapolis, and the Hamburger Kunsthalle in Hamburg, among others. Tate Britain recently opened a room in its collection devoted entirely to Emin's work. In 2007 Emin represented Britain at the 52nd Venice Biennale, was made a Royal Academician and was awarded an Honorary Doctorate from the Royal College of Art, London, a Doctor of Letters from the University of Kent, and Doctor of Philosophy from London Metropolitan University.

Teresita Fernández has been featured in numerous solo exhibitions internationally and abroad at sites including the New Museum of Contemporary, New York; the Centro de Arte Contemporaneo de Malaga, Spain; the Institute of Contemporary Art Philadelphia; SITE Santa Fe, New Mexico, Castello di Rivoli, Torino, Italy; the Witte de With in Rotterdam; and the Miami Art Museum, Florida. Fernández has completed major public commissions including one at the Louis Vuitton Maison in San Francisco, California and another at the Seattle Art Museum's Olympic Sculpture Park, where her work Seattle Cloud Cover allows visitors to walk through a covered skyway while viewing the city's skyline through tiny holes in multicolored glass. In January 2009, The Blanton Museum of Art unveiled Stacked Waters, a site-specific installation created for the cavernous entrance of the museum. Her new permanent commission Blind Blue Landscape opened in September 2009 at the renowned Benesse Art Site in Naoshima, Japan. Also completed in September 2009 is Starfield, a large-scale commission for the new state-of-the-art Dallas Cowboys Stadium. She is the recipient of numerous fellowships and awards both in the U.S. and abroad, including the 2005 MacArthur Foundation Fellowship, a 2003 Guggenheim Fellowship and the 1999 Louis Comfort Tiffany Biennial Award. Her work is included in numerous private collections as well as the permanent collections of the St. Louis Art Museum, the San Francisco Museum of Modern Art, the Museum of Contemporary Art, Miami, the Miami Art Museum, the Walker Art Center in Minneapolis, Minnesota, the Sammlung Goetz in Munich, Germany and the Albright-Knox Gallery in Buffalo, New York. A solo exhibition of new and older works recently on view at the Contemporary Art Museum at the University of South Florida, traveled to the Blanton Museum of Art in Texas in 2009, and will travel on to the Cleveland Museum of Contemporary Art in 2011. A new monograph edited by David Louis Norr with essays by Dave Hickey, Anne Stringfield and Gregory Volk published by JRP Ringier and the USF Contemporary Art Museum accompanies the exhibition. In early 2010, Fernández completed a residency at the Singapore Tyler Print Institute.

Primarily known for his innovative combination of video, sculpture, and performance, Tony Oursler's work explores the relationship between the individual and mass media systems with humor, irony, and imagination. He received a BFA from the California Institute of the Arts in 1979. In 2010, Oursler presented Lock 2, 4, 6 an immersive exhibition at the Kusthaus Bregenz in Austria, which took over three floors of the museum and recently, his retrospective exhibition Dispositifs traveled from the Jeu de Paume in Paris to the DA2 Domus Atrium in Salamanca and the Kunstforeningen in Copenhagen. In a response to Gustav Courbet's The Artist's Studio, Oursler exhibited Studio: Seven Months of My Aesthetic Education (Plus Some), featuring a multimedia installation, at the Metropolitan Museum of Art in New York. Curator Robert Storr included Oursler's sculptures in the acclaimed 2004 exhibition Disparities and Deformations: Our Grotesque at SITE Santa Fe. His work is represented in numerous U.S. museum collections, including the Museum of Modern Art, the Whitney Museum of American Art, the Museum of Contemporary Art in Chicago, as well as the Tate Gallery and the Saatchi Gallery in London and the Centre Georges Pompidou in Paris, among other prestigious private collections worldwide. A solo exhibition of Oursler’s works is currently on view at Lehmann Maupin’s Lower East Side gallery through 5 December, 2010. Tony Oursler lives and works in New York.

Jennifer Steinkamp is a Los Angeles based artist known for her projected installations utilizing 3-dimensional computer animation. Steinkamp’s works interact between the actual space and illusionistic space resulting in environments where the lines between viewer and object blur. Steinkamp's work can be seen in public