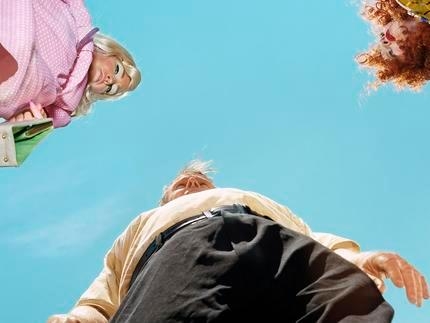 Alex Prager is a Los Angeles-based photographer and filmmaker celebrated for her fabrication of richly colored, meticulously constructed, theatrical and highly cinematic tableaux. Openly influenced by the aesthetics of mid-20th century American cinema, popular culture, fashion, pulp fiction, photography and her hometown of Los Angeles, Prager constructs works of technicolor that posit emotion and human melodrama. Surrounded by Prager’s new works, ArtAsiaPacific sat down with the artist before her debut exhibition in Hong Kong at Lehmann Maupin to discuss her inspirations, fascinations and gravitations.

Amani Vassiliou: As a self-taught photographer, you cite the experience of viewing William Eggleston’s exhibition at the Getty Museum as a catalyst to your own explorations in photography. What was it about his work that inspired and influenced your creative output?

Alex Prager: It’s interesting that this is coming up again now, because his work is about taking seemingly mundane, kind of in-between nowhere moments and finding something interesting in them. That was what I responded to in Eggleston’s works, the moments that he chose to capture forever seemed very mundane, holding no particular special quality. I was completely blown away when I saw his images, not understanding why I was having this emotional reaction to something that was supposed to be nothing special. That was how I felt, and I wanted to understand what that was about. Now, I guess I understand a lot more about composition and colors.

AV: In contrast to Eggleston who captures fleeting moments, your oeuvre of photography and video work feature staged scenes in which the mise-en-scène is reminiscent of classic Hollywood films and popular culture. What is your inspiration and intention in utilizing this particular aesthetic?

AP: I am using a lot of tools to engage people and to create a façade of this fictional world. But then within that world I can speak on a variety of levels. I can speak on any subject freely and still find that there will be an audience wanting to engage with it; even if they are just there because of the bright colors, long eyelashes and the costumes that they feel nostalgia towards, or the familiar kind of locations that I put them in, there is something!

AV: In that respect, we often see a diverse variety of people relating to your work—including children.

AP: I love that when I see children at the openings they are always talking excitedly about something. Maybe they think someone [in the photographs] looks familiar, or maybe it’s something about the colors. I love that my work has that effect. That’s one of the main reasons I got into art. It’s a way to connect with people that you wouldn’t necessarily normally have a conversation with. You can connect through images. It’s just so cool.

AV: On the similar subject matter of the audience, your new works—such as Culver City (2014) and Burbank (2014)—take on extreme and unexpected vantage points that verge on voyeurism. Can you explain the production process behind achieving this perspective?

These kinds of works always involve a very in-depth and kind of crazy pre-production, because of casting demands. There are usually a lot of people, and I have to come up with characters for each one and then find the costumes [for them]. I have a lot of costumes in my studio that I have collected over the years. I have wigs and props, and I also rent things. Then I have to also find a location. I work with a ton of people on these things, and usually the same people over and over. Once I find someone that understands my aesthetic, we can talk freely to each other. They can guess what I am going to say before I say it, which just makes everything so much easier.

AV: In these works, how did you stage the characters?

AP: We built a piece of Plexiglas that was the right dimensions and thick enough to fit an “x” amount of people. Then we deliberately covered all around the bottom of it in black, so that my reflection wouldn’t be in the pictures.

AV: Your exhibition here at Lehmann Maupin is stated as a continuation of your “exploration of the psychological experiences of crowds and the individuals within them.” By contrast, many of your earlier works, such as those found in your “Big Valley” series from 2008, focused on a singular subject. What incited this shift in your work, and what elements of a crowd do you find transfixing?

AP: I have always found crowds interesting. Looking back at my earlier work it was almost as though I was teaching myself how to make crowd photos. I tried it several times over the past ten years before I finally figured out the way that I wanted to do it. I never wanted to take a picture that looked realistic; I always wanted it to have that false appearance and to marry the worlds of reality and fiction. If you zoom into one of my crowd photos, such as Crowd #3 (Pelican Beach) (2013), you can see my earlier work in there, with that focus on the heroine, and then when you zoom out you can see a bunch of them all together. So in a way, my previous work was a study for what I am doing now. I guess that’s what it is for an artist; you are constantly evolving whatever you were last working on.

AV: In terms of aesthetic, the landscape of your hometown, Los Angeles, and its congruent metaphor for the juxtaposition between beauty and darkness is a repetitive inspiration across your work. Do you envision a continuation with this landscape, or have you cultivated any new fascinations?

AP: I just think that Los Angeles is really my muse! I don’t know if that’s ever going to change, [because] I have such a relationship with that city. I was born there, and I have spent so much time there. I have tried to move away so many times throughout my teens and twenties and I just always come back. Whenever I try to shoot in other places I find I am always subconsciously trying to make it look like Los Angeles. I ended up just telling people that I am in Los Angeles, and that has become my thing. But let’s see what the future will hold.

AV: This is your first visit to Hong Kong, and the exhibition marks your first solo show in Asia. What has been your impression so far?

AP: I am very curious to see what the response and reaction will be to my work, because I have never shown here before. I really have no idea how it will be received, because it’s such a different culture here from where I am used to showing. So it’s exciting and I feel really privileged to be exhibiting here.

Alex Prager’s eponymous solo exhibition is on view at Lehmann Maupin gallery, Hong Kong, until May 16, 2015.