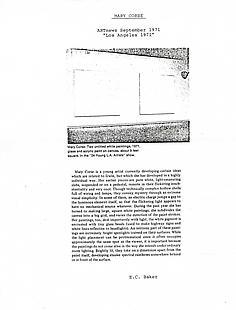 Mary Corse is a young artist currently developing certain ideas which are related to Irwin, but which she has developed in a highly individual way. Her earlier pieces are pure white, light-emanating slabs, suspended or on a pedestal, remote in their flickering insubstantiality and very cool. Though technically complex hollow shells full of wiring and lamps, they convey mystery through an extreme visual simplicity. In some of them, an electric charge jumps a gap to the luminous element itself, so that the flickering light appears to have no mechanical source whatever. During the pasty year she has turned to making large, square white paintings; she subdivides the canvas into a big grid, and varies the direction of the paint strokes. Her paintings, too, deal importantly with light; the white pigment is encrusted with tiny glass beads (used to make highway sings and white lines reflective to headlights). An intrinsic part of these paintings are extremely bright spotlights trained on their surfaces. White the light placement can be problematical since it often occupies approximately the same spot as the viewer, it is important because the paintings do not come alive in the way she intends under ordinary room lighting. Brightly lit, they take on a dimension apart from the paint itself, developing elusive spectral rainbows somewhere behind or in front of the surface.