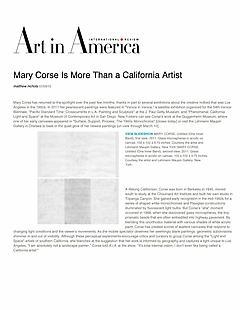 Mary Corse is More Than a California Artist
By Matthew Nichos

Mary Corse has returned to the spotlight over the past few months, thanks in part to several exhibitions about the creative hotbed that was Los Angeles in the 1960s. In 2011 her pearlescent paintings were featured in "Venice in Venice," a satellite exhibition organized for the 54th Venice Biennale, "Pacific Standard Time: Crosscurrents in L.A. Painting and Sculpture" at the J. Paul Getty Museum, and "Phenomenal: California Light and Space" at the Museum of Contemporary Art in San Diego. New Yorkers can see Corse's work at the Guggenheim Museum, where one of her early canvases appeared in "Surface, Support, Process: The 1960s Monochrome" [closes today] or visit the Lehmann Maupin Gallery in Chelsea to bask in the quiet glow of her newest paintings [on view through March 10].

A lifelong Californian, Corse was born in Berkeley in 1945, moved south to study at the Chouinard Art Institute and built her own studio in Topanga Canyon. She gained early recognition in the mid-1960s for a series of shaped white monochromes and Plexiglas constructions illuminated by fluorescent light bulbs. But Corse's "aha" moment occurred in 1968, when she discovered glass microspheres, the tiny prismatic beads that are often embedded into highway pavement. By blending this unorthodox material with various shades of white acrylic paint, Corse has created scores of austere canvases that respond to changing light conditions and the viewer's movements. As the mobile spectator observes her seemingly blank paintings, geometric subdivisions shimmer in and out of visibility. Although these perceptual experiments encourage critics and curators to group Corse among the "Light and Space" artists of southern California, she blanches at the suggestion that her work is informed by geography and captures a light unique to Los Angeles. "I am absolutely not a landscape painter," Corse told A.i.A. at the show. "It's total internal vision. I don't even like being called a California artist."