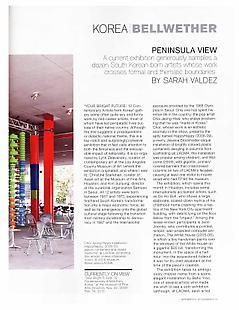 "YOUR BRIGHT FUTURE: 12 Contemporary Artists from Korea" gathers some often quite wry and funny work by mid-career artists, most of whom have led peripatetic lives outside of their native country. Although the title suggests a propagandistic or didactic national theme, this is a top-notch and surprisingly cohesive exhibition that in fact calls attention to both the flimsiness and the inescapable impact of nationality. It is co-organized by Lynn Zelevansky, curator of contemporary art at the Los Angeles County Museum of Art (where the exhibition originated, and where I saw it); Christine Starkman, curator of Asian art at the Museum of Fine Arts, Houston; and Kim Sunjung, director of the curatorial organization Samuso in Seoul. All 12 artists were born between 1957 and 1972, experiencing firsthand South Korea's transformation into a major economic force, as well as its emergence onto the global cultural stage following the transition from military dictatorship to democracy in 1987 and the international exposure provided by the 1988 Olympics in Seoul. Only one has spent his entire life in the country: the pop artist Choi Jeong-Hwa, who enjoys proclaiming that he was "made in Korea." Choi, whose work is an esthetic anomaly in the show, presents the aptly named HappyHappy (2008-09), a merry, Jessica Stockholder-esque installation of brightly colored plastic containers dangling in columns from scaffolding (at LACMA, this installation was popular among children), and Welcome (2009), with gigantic, primary-colored banners that crisscrossed columns on two of LACMA's facades, causing at least one visitor to inquire aloud who had TP'ed the museum.

The exhibition takes its ambiguously chipper name from a spare, elegant installation by Bahc Yiso, one of several artists who made me wish to see a solo exhibition (although, at LACMA, each artist was provided with ample space in which to show a variety of work). Bahc earned an MFA at Brooklyn's Pratt Institute in 1985, founded Minor Injury gallery in the borough shortly thereafter, returned to Seoul disenchanted with the U.S. in 1994 and died in Korea in 2004 at the age of 47. Your Bright Future (2002/09) consists of a group of 10 klieg lights beaming at a blank white wall. This poetic if bleak display makes you wonder: What future? (One that's apparently hit a slab of Sheetrock.) Spotlights? (Trained on nothing special.) The point? (Fleeting, perhaps illusory, fame and power; in L.A. the piece took on particular resonance.) Bahc's Wide World Wide (2003) is a swath of canvas painted ocean blue and hosting names of places so obscure they seem fictitious-Araraquara, Nunachuak, Fakfak, Bobo Dioulasso and Quetzaltenango, among others-printed neatly on white paper tags attached by straight pins, with their phonetic equivalents in Korean painted on
the canvas below, raising questions about the limitations of translation, particularly in regard to place names.

Making up stories altogether, Gimhongsok pairs elaborate, handwritten wall texts with sculptures, video and drawings reminiscent of Raymond Pettibon. Gim also presents a video with English subtitles that have no relationship with the utterances of the paid actors on screen (as you learn from a wall label). This, in turn, makes the
subtitles in The Wild Korea (2005)-and, by implication, all subtitles--suspect. This darkly comical video shows a man, whose face turns red, then blue (the colors in the flags of both Koreas), being interviewed about his wild experiences from September to November of 1997, when, he imagines, guns were legalized in South Korea (privately owned firearms are strictly prohibited in the country). There are reenactments of some of his adventures: he obtains a Beretta, no hassle; behaves like a character in a TV cop show; and then gets shot and nearly dies. Upon recovering, he is kidnapped by his high-school girlfriend, whom he hasn't seen in years, following
a campy shootout in a restaurant. Extensive wall text accompanies the video, providing a (fake) historical context.

Further testing the limits of the plausible is Gim's Bunny's Sofa (2008). In this installation, what appears to be an actual person in a white rabbit costume reclines on
a pink divan beneath the following handwritten wall text:

The person performing in the rabbit costume is Lee Mahn-Gil, a North-born laborer. Despite his status as an illegal immigrant, he will be paid five dollars per hour and perform eight hours a day. I would like to give a round of applause to this foreigner who is temporarily employed for the exhibition. To ensure his successful performance, please refrain from touching him and any behavior that may impede his performance.