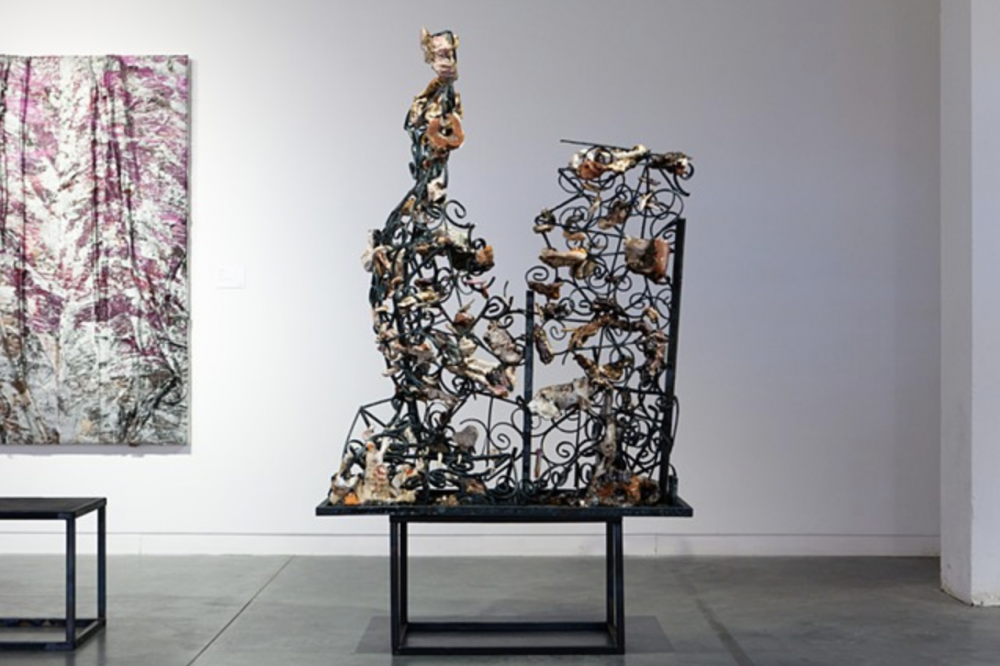 Like Gerhard Richter’s squeegee, Roy Lichtenstein’s Ben-day dots, and Julian Schnabel’s crockery, Angel Otero’s novel painting technique has allowed him to refine an inimitable style. CAM Raleigh presents five of these signature works—all abstract—in which the artist layers oil paint onto a plate-glass or Plexiglas support before scraping off the accumulating “skins,” as he calls them, and collaging them onto a canvas, letting the thickened medium ripple, sag, and wrinkle, marvelously, across the cotton surface. In Bacchanal II (all works cited, 2012), strata of paint transform into something not unlike fabric, with peachy pinks and bold autumn-leaf yellow awash in a sea of earthy browns and duct-tape gray, and flecks of bloody-bandage red and basic black poking through. The spiraling lines of shimmering gold over dark maroon in Untitled, and the folds of aubergine and silver in Reed, evoke the gilded extravagance of the Spanish Baroque and the sublime virtuosity of Abstract Expressionism.

Otero’s previous attempts at three-dimensional work have been subordinate to his painting—until now. The artist welcomes the random lolls and flops of oil skins in his painting, but he further relinquishes control while producing seven new remarkable sculptures of painted porcelain wrapped around prefabricated steel objects, pushing the kiln’s temperature past the normal limit. Clay pieces tinged green, yellow, and orange in Sunday hang onto, and fall from, a set of mangled outdoor patio chairs and table, everything brittle and cracked from the excessively intense heat. Two untitled works—the irregularly shaped, indigo-splashed ceramic vertebrae towering nearly ten feet along a steel spine, and the ossified chunks of muted-rose and chocolate-brown porcelain dangling from twisted sections of a gate or fence—look as if they were hit by a hurricane, earthquake, and volcano all at once. In a world where both natural and man-made disasters are having increasingly catastrophic implications, Otero’s elegant aesthetic of ruin feels uncannily poignant.