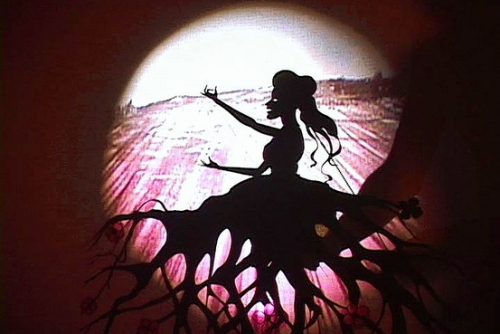 It's odd to see a cellphone in a drawing by Kara Walker.

Ms. Walker's work sparked a heated public debate a few years back among black artists over whether her plantation-era imagery indicted, or just highlighted, racist stereotypes. Ms. Walker, who is African-American, says her silhouettes are a way for her to mine the delicate identity politics of black America, and for that she began with its seismic start, slavery.

Yet in a major shift, her new works on view until June 4 at New York galleries Sikkema Jenkins and Lehmann Maupin reveal she's beginning to inch beyond the Civil War into the 20th century. A majority of the 40-odd pieces at Sikkema are set in the Jazz Age through the Great Depression and depict dapper characters who look like Josephine Baker or Harlem Renaissance writers. Sex and violence still show up in these works, but so do images chronicling the rural-to-urban migration attempted by so many black Southerners in the early 1900s. Instead of relying on her signature silhouettes, she's used graphite to draw the large works at Sikkema.

Ms. Walker, in a recent interview, said she was fascinated by the range of identities that black people embraced after slavery ended. She even blends eras: Skyscrapers appear to drop like stalactites into her portrait of a sharecropper on the move, "Cover of My Negro Novella." In another work, "Muckraking Prophet from the 21stc. Foretells Coming Doom," she puts a Tina Turner-like nude in knee-high boots on a stage before an audience of wide-eyed, 19th-century characters from her older works. Only one member of the crowd seems at home in this flux—a black girl tapping away on her iPhone.

At Lehmann Maupin, Ms. Walker has unveiled several films, including a 17-minute shadow-puppet play called "Fall Frum Grace, Miss Pipi's Blue Tale" that tells the story of a Southern white woman on the prowl. Which time period or character does she relish most? Ms. Walker is diplomatic: "They're all made of paper, so they're equal in my eyes."