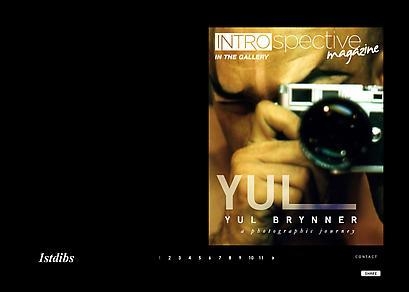 In The Gallery
Ted Loos

The late great actor Yul Brynner (1920-1985 was knows for his perfectly round and shaven head, as seen in classic movies like The King and I, for which he won a Best Actor Oscar. But based on a just-opened exhibition in New York of Brynner’s photography at Lehmann Maupin’s Chrystie Street space, his eye was as distinctive as his pate.

The show, “YUL, Yul Brynner: A Photographic Journey” is up through September 25 and features 70 choice images, most of which are from the 1950s and ‘60s, of the more than 8,000 pictures Brynner took during his lifetime. It coincides with the release of a massive four-volume book of his work from Edition 7L, Karl Lagerfeld imprint at Steidl.

"There was a real seriousness, and a real artistic intention to his photography," says the actor's daughter Victoria Brynner, just in from Los Angeles for the exhibition's opening. She organized both the show and the book as a tribute to her dad. "It's like a good wine," she adds. “This work has aged really well."

On the gallery walls hang some images that you'd hope to see from a Hollywood legend: Liz Taylor by the pool; on-set snaps from the set of The Ten Commandments; Dean Martin embracing Jerry Lewis so as to practically carry him. But there are also candid family snapshots from Victoria's youth in Switzerland (she was born to Brynner's second of four wives, the Chilean model Doris Kleiner).

Somehow, despite a busy acting career that also included Anastasia, and The Magnificent Seven, Brynner took his camera everywhere and developed his eye with constant practice. "Photographing people is so much about how you relate to them, and how much you get into their personality and space; says Victoria. "He had such a talent for that."

Most unexpected in the exhibition, perhaps, are the skillful still lifes like, Glass Study, La Reine Jeanne, France, 1956, a striking image of a half-full congnac glass that is perfectly quartered by light and dark shadows. His favorite picture of all time, says Victoria, is a blurry street scene with an umbrella visible. Also included in the show, the 1958 image looks like an update of an Alfred Steiglitz photo from the 1910s. “I think he liked the painterly quality of it,” she says.

It was a conversation five years ago with the fashion designer Karl Lagerfeld that got the current projects started. (Victoria had already put together one slim volume of her father's photography, published by Abrams in 1996.) As president and founder of Stardust Visions and Stardust Celebrities (both of which she runs with her husband, Gino Sullivan), Victoria produces photo shoots with the likes of Lagerfeld and creates high-profile fashion endorsement deals. Lagerfeld told her. "We should do a little book," which became the not-sa-little four-volume 7L set, with contributions by Martin Scorsese and Bruce Weber.

Knowing everyone who's anyone comes perfectly naturally to Brynner, who grew up with Liz Taylor as her godmother. They're still close, spending every Thanksgiving and Easter together with their families. Growing up, Audrey Hepbum was a frequent visitor to the Brynner home. Richard Burton taught her how to drive.

Amid the swirl of friends and work, Brynner noted how his daughter, at age 15, was taking pictures around the house with her mother’s camera. He gave her a Canon of her own, “He said, ‘I think you’ve got a really good eye, and I want to encourage you to do this,’” Victoria recalls.

One of her first jobs was as a professional photographer for the French agency Gamma. “I shot Jean-Claude Van Damme, Stallone, and Sharon Stone before Basic Instinct came out,” Victoria says. “I took pictures of Angelina Jolie as a teenager with Jon Voight – I think I’m the only person who ever photographed them together.

Given that experience and her sterling background, her current mini-mogul status is no surprise. When Victoria is not making deals - signing up Scarlett Johansson to do ads for Louis Vuitton, for instance - she's raising money for charity. The fight against AIDS has been among her causes, and naturally she has also worked with the Yul Brynner Head and Neck Cancer Foundation. Brynner died of lung cancer, and at the end of his life he spoke out against cigarette smoking, a lifelong habit.

Now, Victoria is starting a new non-profit, Stardust Vision Cares. "Our intention is to support lower-income children in expressing themselves through photography; she says. Given the centrality of that medium to the lives of both father and daughter, and the legacy passed between them, it's certainly a fitting cause.