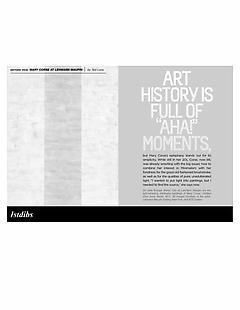 Art history is full of "Aha! Moments," but Mary Corse's epiphany stands out for its simplicity. While still in her 20's, Corse, now 66, was already wrestling with the big issues: how to combine her interest in Minimalism with her fondness for the good old-fashioned brushstroke, as well as for the qualities of pure, unadulterated light. "I wanted to put light into paintings, but I needed to flnd the source," she says now.

Driving on the Pacific Coast Highway near Los Angeles one evening during sunset, it hit her. She was looking down at highway dividing lines, with their subtly sparkly effect. "They
were right in front of me," she says, still marveling. "I thought, 'Wow, that's it!" Corse figured out how to order some "highway safety spheres." as the luminous beads that are mixed into the yellow paint are officialy called, and a whole body of work was born. The most recent six examples are on view through March 10 at Lehmann Maupin's Chelsea branch.

Corse's large-scale paintings, with their straight geometries, have an affinity with the work of Agnes Martin and other artists who have explored Minimal territory. but with qualities all their own - as you move, they change completely, soaking up and reflecting the available light. That perspectival shift was key for her. "The artist works intuitively, but I had taken a physics class," says Corse, who lives in a less-traveled part of Topanga Canyon, outside of Los Angeles. "I knew there was no objective reality."

Her independent personality, physical isolation and stalwart adherence to her own ideas took Corse out of the mainstream art world for a while, but the Lehmann Maupin show represents a recent revival of interest in her work. At the Getty Museum's recently closed mega-show - Pacific Standard Time: Crosscurrents in L.A. Painting and Sculpture, 1950-1970 - her shimmering 1969 untitled work demanded attention (and also counted as one of several works in the show by women who have been underrepresented of late, including Helen Lundeberg).

The everyday source of the sparkle in the works tickles Corse. "It's Pop art!" she says. Making them requires that she suspend herself on a platform over the canvas, which lies flat. Her assistant moves her around as she paints, and the challenge is that the works change every time she changes position - but then again, that's the whole point. Says Corse, "Art isn't on the wall. It's in your perception."